Petronas SRT’s Franco Morbidelli says he was forced to ride in “safety mode” to 11th in the MotoGP European Grand Prix due to a “sky high” front tyre pressure.

The Italian started from eighth in Sunday’s race at Valencia, but was unable to get close to the podium battle in the early stages and soon found himself slipping to the fringes of the top 10.

Morbidelli says the pressure in his front hard tyre rocketed while he was riding in a group, which forced him to change tact and bring his Yamaha home in the “safest way possible”.

“It was a difficult GP for us, very difficult,” he reflected.

“You just have to go into safety mode and bring the bike home in the safest way possible.

“The championship chances are almost gone, we are much further from Joan, who looks definitely to deserve this championship more than anyone else.

“But the gap between me and the second got smaller, so we’re still in play for that.” 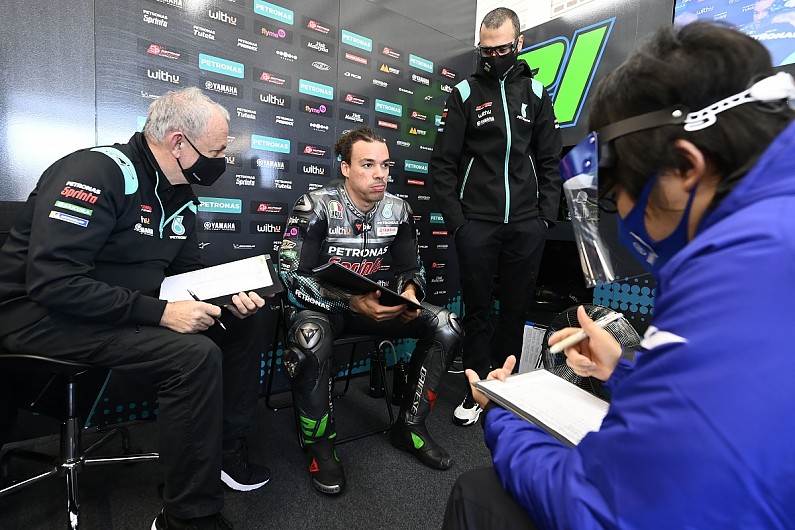 Morbidelli says he had the same tyre pressure issue during the Aragon GP, where team-mate Fabio Quartararo also suffered a similar fate and plummeted out of the points to 18th.

But Morbidelli is unsure if the problem is a general issue of riding in a pack, or if it’s an issue which impacts Yamaha harder.

“I suppose with the temperature also other bikes suffer from this air expansion in the tyre.

Morbidelli was the only rider on the grid to go for the hard front and rear tyre combination, having spent the entirety of warm-up on the hard rear, but was unsure if this choice was a gamble because his front tyre pressure issue meant he couldn’t evaluate it properly.

He also refused to blame his struggles on the limited dry running at the weekend, as the situation was the same for everybody.

“I would like to say it affected me a lot, but I cannot because it was like this for everyone,” he added.

“So, it affected me, but it affected everyone else. For sure we were not at our prime today, but no-one else was at their prime.

“Well, they [Suzuki] were not at their prime but they were still faster than anybody else.”