MotoGP Teruel Grand Prix winner Franco Morbidelli says he had to go “all or nothing” in the second Aragon race to strengthen his championship challenge.

Morbidelli dismissed suggestions on Saturday after qualifying on the front row that he wasn’t a title contender, despite sitting 34 points off the championship lead.

The Petronas SRT rider led for all 23 laps of Sunday’s race to claim his second win of the season by over two seconds from Suzuki’s Alex Rins, and move to within 25 points off the standings lead with three races to go.

Joking he “had dynamite for breakfast”, Morbidelli admits he had to gamble on tyre choice and made a last-minute switch to the medium to give himself a better chance in the race.

“I knew we had to go for all or nothing today and I knew also that my team, my crew did a wonderful job this weekend and they set it up the bike in the best way,” Morbidelli said.

“I was trusting 100% the package and I just tried to give everything in every lap and finally I felt great all race long.

“We decided to go with the medium and actually it paid off because in the race it was working very well, and I was feeling great with the package today.

Commenting on his championship chances, he added: “We are back in the game, we are 25 points behind the top.

“I think we should be as aggressive as we were today in Valencia and Portimao. I’m feeling great and I want to go full attack like we’ve been doing lately.” 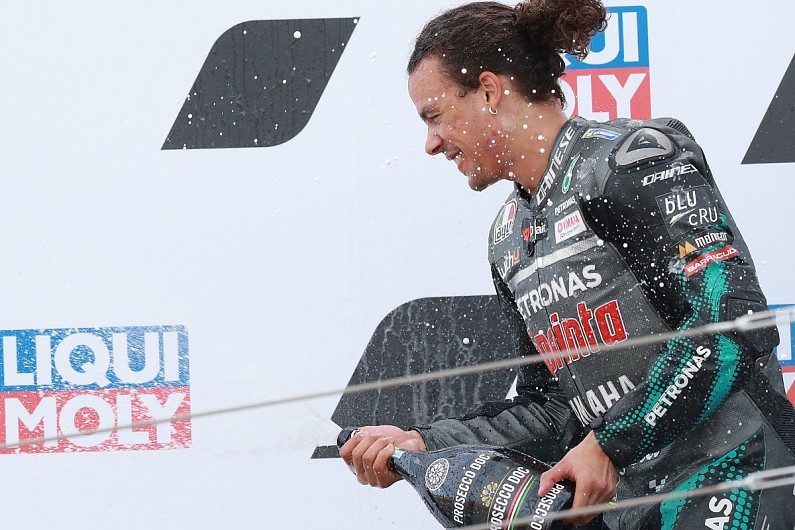 Morbidelli’s dominant victory came as Yamaha’s leading title protagonists Maverick Vinales and Fabio Quartararo struggled to seventh and eighth on the 2020 M1 as they battled a lack of grip.

With just 11 points covering the three Yamahas in second, third and fourth in the championship, Autosport asked Morbidelli if the Japanese marque should be backing him now as its best title hope.

“Damn, it’s so funny: Yesterday I was outside of the battle, today I’m the main guy,” Morbidelli joked.