In beating the field with a 1m46.882s lap on Saturday at Aragon, Nakagami became the first Japanese rider to claim a premier class pole since Makoto Tamada topped Valencia qualifying in 2004.

LCR rider Nakagami was amongst the strongest on race pace in the FP4 session ahead of qualifying, leading many riders to brand him as favourite for Sunday’s race.

Only 29 points down on championship leader Joan Mir – who will start from 12th – several riders have refused to rule Nakagami out of the hunt.

But he insists it is not his focus at the moment, as his “first priority” is simply on securing a maiden MotoGP podium.

Asked by Autosport if his rivals considering him a threat adds pressure, Nakagami said: “For my side, if we can see the standings positions in the championship, I’m P5 and it’s not too far from Joan Mir.

“Okay, for the end, yes, but for now we are fully focussed for the remaining races, four races to go. 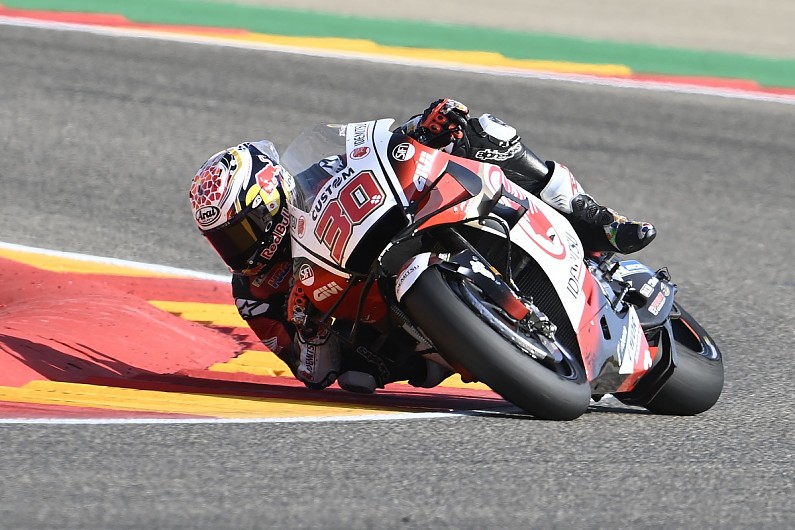 “Almost always I never see the [championship standings]. After the races I don’t check nothing.

“We are pretty focussed on just our job. I think this weekend… I can say tomorrow I can hopefully get the first podium. That’s it, simple.”

Despite topping Friday’s running outright and showing strong pace throughout both Aragon weekends, Nakagami admits his pole came as a surprise.

“It’s an amazing feeling, I didn’t expect to fight for pole position,” he added.

“Maybe our target, if we can fight for the front row it’s enough. This weekend so far, we are quite competitive.

“We knew we can fight at the front. At the end we made a good lap time with the last lap.

“When I saw the first time under 1m47s, it’s a good feeling. And the feeling on the bike is really good.

“So, I’m more than happy. I want to say thanks to my team. Really proud to be in parc ferme in P1.”