MotoGP completes its latest triple-header with a second consecutive race at Aragon with the Teruel Grand Prix. Here’s how to watch qualifying.

Honda’s resurgence has continued at Aragon with Alex Marquez topping the first practice session before Takaaki Nakagami took over at the top in second practice on Friday, beating Yamaha’s Maverick Vinales as LCR team-mate Cal Crutchlow slotted into third place.

It was a difficult day for the Ducati riders though, all finishing FP2 outside of the top 10 with Andrea Dovizioso conceding the Italian manufacturer “didn’t make any step forward”.

After suffering with a front tyre pressure issue in the first Aragon race, and duly dropping to 18th place – therefore losing the MotoGP world championship lead – Fabio Quartararo ended Friday practice fourth fastest, leading him to insist he has “nothing to lose” in the title fight. 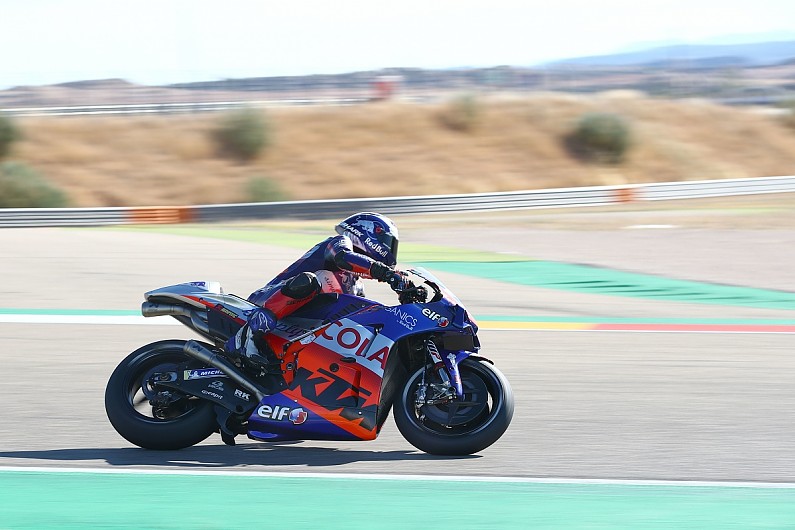 What is the Teruel GP?

The ‘new’ races on the redrawn 2020 MotoGP calendar have all been part of double-headers at the same circuit (Andalusia GP at Jerez, Styrian GP at the Red Bull Ring and Emilia Romagna GP at Misano).

With different races not allowed the same name in the same MotoGP world championship season, Aragon’s second race has been named after the region the circuit is situated in, maintaining the trend of the previous double-headers.

The Valencia double-header will follow a different naming format, with its opening grand prix called the European GP before the second race takes its traditional Valencia GP title. This is because all key region names have already been taken on the shaken-up 2020 calendar. It means the European GP race title is being reintroduced to the series for the first time since 1995 when it was used for the Circuit de Barcelona-Catalunya race.

What time does qualifying start for the Teruel MotoGP?

The fastest 10 MotoGP riders on the FP1-2-3 combined timesheet automatically head into Q2, with the rest of the riders entering Q1 of qualifying. The two riders who are fastest in the 15-minute Q1 session will progress into Q2 to compete with the top 10 from practice. Q2, which also lasts 15 minutes, decides who gets pole position and the qualifying order for the front four rows of the grid.

How can I watch qualifying?

In the United Kingdom, every MotoGP practice, qualifying and race is broadcast live on BT Sport. MotoGP also offers its own live online video streaming service.

What’s the weather forecast for qualifying at Aragon?

Dry and sunny conditions are forecast for qualifying at Aragon, with a very low chance of rain. A high of 19 degrees Celsius for qualifying will mean temperatures will be roughly the same as Friday’s FP2.