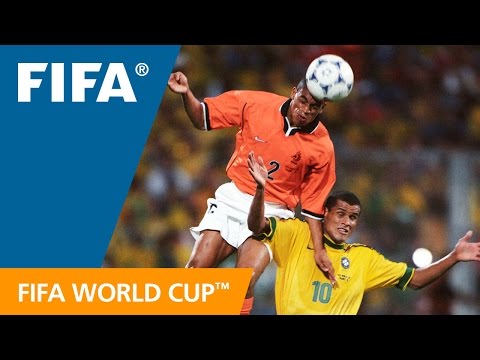 “Is a penalty shootout the most nerve-racking thing a footballer can go through,” a reporter asked Romario?

“For many it can be. But when you have Taffarel in goal it’s like going for a kickaround on the beach,” responded ‘Shortie’ with a cheeky wink.

Taffarel saved penalties as regularly as some players converted them at club level, repelled three against West Germany in the Men’s Olympic Football Tournament Seoul 1988 semi-finals and two against the Netherlands in the last four at the 1998 FIFA World Cup France™.

The spot-kick for which the 54-year-old is most esteemed for saving, however, came in front of 94,000-plus at the Rose Bowl. Taffarel flung his 1.82m frame – short for a goalkeeper – south-west to deny Daniele Massaro, while many attribute misses from Franco Baresi and Roberto Baggio in the same shootout to his fearsome reputation.

In part two of our interview with the Brazil great, he tells FIFA.com about that USA 1994 conquest, willing Carlos Alberto Parreira to give in and recall Romario, what went wrong at Italy 1990 and France 1998, a 17-year-old Ronaldo and being a penalty-saving specialist.

At the Copa America 1989, Brazil hadn’t won the title in 40 years. What are your memories of that tournament?
We were highly criticised at the start. When you play in Brazil, the demands are doubled. The Brazilian supporters are very critical, they expect a lot. Brazil not only have to win, but we have to put on a show. Sometimes it doesn’t happen. Football throws up a lot of difficulties. There was tremendous pressure on us. We suffered a lot, but in the end we won and it was a very important triumph. Forty years, it’s such a long time, especially for Brazil. You look back at all the great players we had during that time who hadn’t won it – that shows how difficult it is. Look at the Seleção of ’82 – it was full of incredible players, but sometimes it’s insufficient to win.

There was friction between Bebeto and Romario at the time…
We were pretty much from the same generation. Me and Romario were from the same age group. Bebeto was from the one before – the one with Dunga, Jorginho. There was a fight for places in the squad, then a fight for starting places. One had been at Flamengo and the other at Vasco. Romario and Bebeto had very different personalities and very different playing styles. Romario was an individual whereas Bebeto liked to link up with others. So there was a little bit of friction. Suddenly they were thrown in the Seleção together and, at that tournament, they simply had to understand each other – quickly. They did, on and off the pitch. They became great friends and formed one of the best strike forces in history.

Brazil were highly criticised after Italy 1990, but you won your first three matches and dominated Argentina in the Round of 16. What did you think of the Seleção’s campaign?
Every player who was there laments ’90 a lot. As a squad and an XI, we were the best national team at that World Cup. We had so many great players – even on the bench. The attack, for example, was Careca and Muller and then on the bench was Renato Gaucho, Romario, Bebeto. Imagine having three forwards of that level on your bench! We were strong in all positions. But we had arguments in training, other problems and unfortunately, instead of playing as a team, each player was playing for himself. There was more focus on playing spectacular football than there was winning and it cost us. We should have won that World Cup. We played much better than Argentina, but we lost. They had one chance, after that play from Maradona, and scored it. We had 20 chances and missed them all. That’s football. But I’m absolutely certain of this: Brazil lost that World Cup to ourselves.

Carlos Alberto Parreira banished Romario from the national team during the USA 1994 qualifiers, left him out of the squad for the must-win last qualifier against Uruguay, and only relented and recalled him due to an injury crisis. In your own head, had you been willing Parreira to recall him?
Me, every other player and the whole of Brazil! (laughs) It was obvious that we needed a player with that kind of personality, a killer in front of goal, and a player who took responsibility and delivered when it mattered. Thank God Parreira ended up calling him up at the last minute. Romario walked into the squad, with that confidence and upbeat nature of his, started the game and was crucial to us getting to the World Cup. Romario produced a great performance and it was one of the Seleção’s best performances during my career. I’m very proud that I won the World Cup, and for this I thank God that Parreira recalled Romario.

Can you tell us about the Seleção’s dinner with Ayrton Senna in Paris after the friendly against Paris Saint-Germain?
It is an experience I will always treasure. Ayrton Senna was an idol for everyone in Brazil. He was a huge patriot, a great sportsman and a great person. We were preparing to attempt to become four-time world champions, and he was attempting to become a four-time world champion at Formula One. I couldn’t tell you a single thing about the game against Paris Saint-Germain; the only thing I remember is meeting Ayrton Senna! Senna was a really cool, one-of-a-kind guy. He was so charismatic yet so humble. He walked into our hotel – no posing like celebrities do, no security around him, no fuss – and you would have thought he was just a regular guy. Funnily enough, he was convinced that one of us – he wasn’t sure if it would be him or us – would become four-time world champions. He had some really inspiring words for us. I think the spirit that we had in ’94, we got it from Ayrton. His accident was devastating for the whole of Brazil. When he died, we all said, ‘Let’s go out and win this World Cup for Ayrton Senna.’ Fortunately we managed to do that, to honour him with that banner after the Final, ‘Senna, aceleramos juntos’ (Senna, we accelerated together). I’m very proud that we won the World Cup for Senna.

The Senna-saluting Seleção of ’94 in stats

Who do you think were Brazil’s toughest opponents at USA 1994?
There wasn’t one easy game. Italy had a great side. We had a very difficult game against the United States. Sweden, who aren’t traditionally a big team, were really good. We played them twice – drew one, won 1-0 in the other. But I think I’d say Holland, who had so much talent. We won 3-2. It was a really good game to watch, but very tough for us to win.

🥅 A #WorldCup Final goes to penalties. Is there anyone you’d prefer in goal to the incredible Taffarel? 🧤

You really gained a reputation as a penalty-saving specialist during the 1991/92 Serie A, stopping four of the eight spot-kicks you faced, including ones from Marco van Basten, Roberto Mancini and Rudi Voller. Do you think your reputation was in the Italian players’ heads?
(laughs) I don’t think so. It was the first World Cup to be decided by penalties. It was a huge responsibility for the takers. It wasn’t easy to walk from the centre-circle, in a packed-out stadium, in that atmosphere, knowing millions and millions of people are watching you on television, to the area. I think it was more psychological than me saving penalties in Italy.

Can you describe the moment Brazil became world champions?
It was a really special moment. It was strange. When I was preparing to save Baggio’s penalty, I got this feeling in my head that the World Cup was ending right there. If Baggio had scored, Bebeto still had a penalty to win it for us. I didn’t know if I would save it or he would miss, but I just knew that Baggio would kick the last ball at that World Cup. It was an incredible sensation. I thanked God for giving me such a moment. There’s a really cool photo of Baggio with his head down, devastated, and me on my knees euphoric. It’s always like that in football – one player is sad and the other happy.

A short while before the World Cup, Julio Cesar, Valber, Mozer, Ricardo Gomes and Ricardo Rocha were all ahead of Aldair and Marcio Santos in the pecking order, but injuries and disciplinary problems meant the latter two formed the centre-back pairing. What did you think of that partnership?
Superb. Aldair was always very technical, calm. He played as well with both feet. He was always very well positioned, fast. Marcio Santos was younger, but he complemented Aldair really well. They had great partnership. I’ll be honest: I didn’t do much at that World Cup because that partnership, with the fullbacks and Dunga, Mauro Silva, Mazinho, Zinho, didn’t enable teams shots. We had the best defence and the best attack at that World Cup.

You said you had little to do, but Cafu recently told us you were Brazil’s best player at USA 1994…
(laughs) Cafu is very generous. He was another player with a lot of character, who transmitted confidence. He always gave his all. The whole squad was like that. I don’t think we had one player who stood apart. We played as a team, played for each other.

Ronaldo was at that World Cup as a 17-year-old. What was he like back then?
Ronaldinho (editor’s note: Ronaldo is commonly known as Ronaldinho Fenômeno in Brazil) has always been a joker. He was really, really young, but he wasn’t shy, was always messing around, always really happy. We knew we couldn’t put him in a big game. He wasn’t prepared, he wasn’t mature enough as a player. But I think that experience in ’94 – being a part of that group of players, winning the World Cup – helped him become the magnificent striker that he was. I attribute his success – and Brazil’s – over the coming years to that. Ronaldinho’s evolution after that was incredible. In ’95 he was already totally different – stronger, better prepared, more confident and a better finisher. But it was great for the squad to have Ronaldinho there in ’94 – he brought us a lot of happiness.

What did you think of the player he became?
A phenomenon, fantastic. He was really quick, deadly. His dribbles would always leave opponents on the floor. He played with joy, pleasure. He was great to watch and an unbelievable footballer.

In the France 1998 semi-finals, on the day you became the first Brazilian to win 100 caps, you guessed the right way on all four Netherlands penalties and saved two…
That semi-final in ’98 was fantastic. I just wish the World Cup had have ended there – I would have been the hero! (laughs) We were up against Holland again. Holland, who always deserve more than they win in World Cups. They had so many talented players once again. It was really even, it went to penalties, and fortunately we won. I always try to delete the Final from my memory, but that semi-final is something I remember very fondly. It was a magical day.

And the Final?
It was tragic. Losing is part of football, but for a national team like Brazil, where football is such a huge part of life, to lose 3-0 to France in a World Cup Final isn’t right. It wasn’t fair on our supporters. We don’t like to use the Ronaldo excuse, but that affected our team massively. The mood, concentration, confidence. It was gutting that had to happen on that day. But I don’t want to take anything away from France. They had a great side, didn’t start the World Cup well, but pulled it together and were worthy winners.