MotoGP is gearing up for a frantic nine races in the space of 11 weeks to finish the redrawn 2020 calendar, with Misano hosting a double-header over the next two weeks.

After a tough pair of races in Austria, the Yamaha riders have returned to the front with Fabio Quartararo topping Friday practice ahead of Petronas SRT Yamaha team-mate Franco Morbidelli.

Despite topping Friday practice, Quartararo conceded he still hasn’t fully rediscovered his all-conquering feeling with his Yamaha that resulted in his double victory at Jerez.

But like previous seasons the circuit appears to suit the M1, even with the recent resurfacing, with factory duo Maverick Vinales and Valentino Rossi also in frontrunning contention, while the Spaniard topped FP1.

After the dramatic finish to the Styrian GP, Pol Espargaro will be hoping to stay in the fight for the podium having ended FP2 third fastest for KTM less than two-tenths ahead of rookie Tech3 KTM rider Iker Lecuona whose pace “shocked” Espargaro.

Behind the Yamahas and KTMs, Danilo Petrucci led the Ducati charge with seventh place in the afternoon session ahead of Brno winner Brad Binder (KTM) and Styrian GP winner Miguel Oliveira (Tech3 KTM). 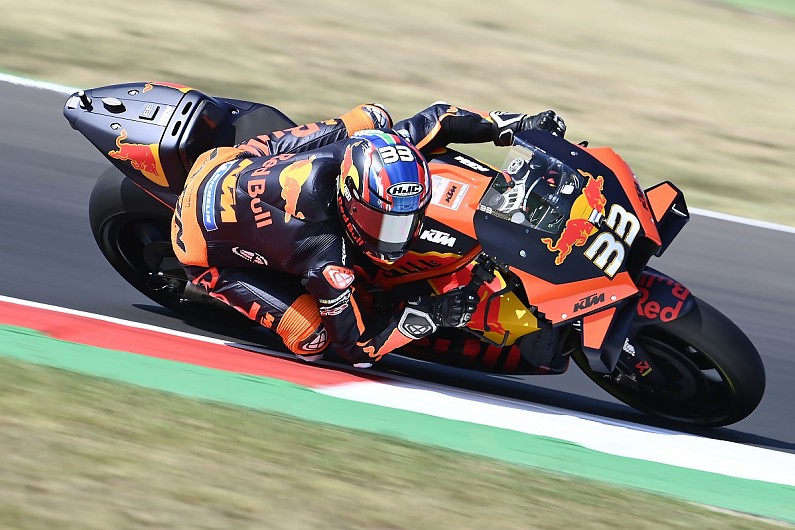 What time does qualifying start for the Misano MotoGP?

The fastest 10 MotoGP riders on the FP1-2-3 combined timesheet automatically head into Q2, with the rest of the riders entering Q1 of qualifying. The two riders who are fastest in the 15-minute Q1 session will progress into Q2 to compete with the top 10 from practice. Q2, which also lasts 15 minutes, decides who gets pole position and the qualifying order for the front four rows of the grid.

How can I watch qualifying?

In the United Kingdom every MotoGP practice, qualifying and race is broadcast live on BT Sport. MotoGP also offers its own live online video streaming service.

What’s the weather forecast for qualifying at Misano?

Warm and sunny conditions are forecast for qualifying at Misano, with a very low chance of rain. A high of 26 degrees Celsius for qualifying will mean temperatures will be fractionally cooler than Friday’s FP2.