Miguel Oliveira believes the absence of reigning champion Marc Marquez has made more riders think they can win races in the 2020 MotoGP season.

Honda rider Marquez will be out for at least another two months after breaking his right arm in a crash during the Spanish Grand Prix, while stress damage to the titanium plate fitted to the bone in his Andalusian GP comeback attempt necessitated a second operation.

So far in 2020, there have been three new winners in Petronas SRT’s Fabio Quartararo and KTM duo Brad Binder and Oliveira, while Ducati’s Andrea Dovizioso has taken the other victory this year.

In addition, the likes of Franco Morbidelli, Joan Mir, Alex Rins, Pol Espargaro and Jack Miller have all mounted serious challenges for victory in the opening five rounds.

The unpredictable nature of the 2020 season so far means just 35 points cover the top 10 in the standings after the Styrian GP – 30 points fewer than at the same point last year, when Marquez had already won three of the 12 victories he would go on to score.

Styrian GP winner Oliveira feels the opportunity presented by MotoGP’s dominant figure Marquez is the reason for the wild set of results so far seen in 2020, but expects a definitive pecking order to eventually appear. 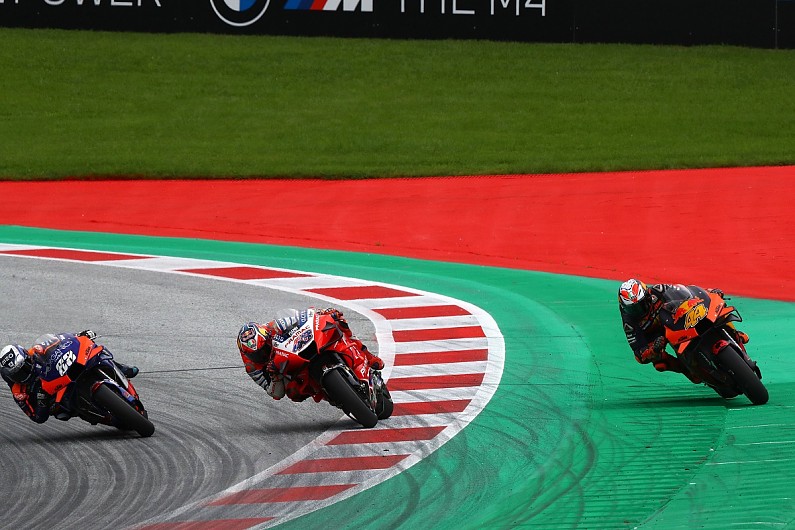 “I think, and it’s just my opinion – I think once Marquez was out, I think everyone all of a sudden felt like they could start to win races and championships,” Oliveira said when asked why 2020 had been so unpredictable.

“So, I think this feeling is still floating around a little bit.

“This is why there is not a clear favourite for the championship fight.

“But I think also that it’s quite early to define that.

“Hopefully in the next few races we see who is more consistently on the podium and making more points, because at the end this is going to make the difference.”

So far, only KTM has managed to win races with two different riders, with all manufacturers but Honda and Aprilia yet to stand on the podium.

This is the first time since Honda returned to the premier class fully in 1982 that it has failed to register a single podium finish in the opening five races.

The manufacturer’s top rider is currently Takaaki Nakagami on the year-old LCR-run RC213V, with the Japanese racer 24 points off the championship lead in sixth.