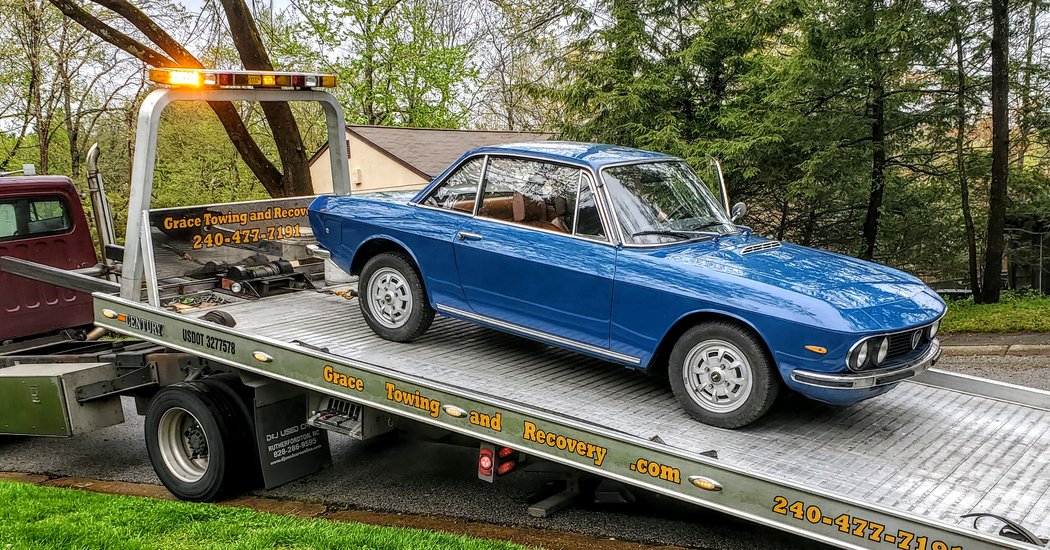 Imagine what it would have been like to unwittingly arrange to buy an oxcart in Pompeii on or about the 23rd of August, 79 A.D. — I’m the 21st-century version of that guy.

I bought a classic car from just outside Lombardy, days before northern Italy became the grimmest hot spot in the global coronavirus outbreak. In hindsight, it looks incredibly foolhardy, but on the day I wired the funds, the area wasn’t on any epidemiological map, and people were still moving freely about the globe. Within days, however, this affluent, cosmopolitan region of Italy, with its conspicuously large elderly population, was locked down.

In the context of what was to transpire in Italy over the next several months, the little blue sports car has little to no significance. It was after all, just a car, not even a particularly valuable, historic or rare one. But the sheer strangeness and improbability of the events that overtook it showed that ordinary things continued to play out, even under the worst of circumstances, albeit not necessarily in an entirely predictable fashion.

Frankly, the only predictable element that runs through any of this is my affinity for odd old cars. With its tiny 1.3-liter alloy V-4 engine mounted at an angle, ahead of the front axles, the Lancia Fulvia Coupe is most certainly a strange car. Strange and wonderful, as well as very pretty and impeccably engineered, all traits that I find irresistible.

Road & Track referred to it as “a precision automobile” in its 1966 test. Since it was introduced in 1965, the Fulvia Coupe was a holdover model that predated Lancia’s 1970 absorption by Fiat. Its virtues remained intact until it was discontinued in 1976. Since the Fulvia’s U.S. price was close to that of a much more powerful Chevrolet Corvette, hardly any were sold in the United States before Lancia took a scarcely noticed, almost 10-year hiatus from selling cars here. Lancia’s 1975 return to the States was brief, ending in 1982, and the Fulvia wasn’t part of this halfhearted comeback.

Today, Lancia is a moribund part of the Fiat Chrysler portfolio — it hasn’t sold cars outside Italy since 2017 — essentially a dead brand walking. Because of Lancia’s lack of consistent presence in the U.S. market, Fulvias are almost nonexistent here.

At best, they have a tiny cult following, mainly among automotive journalists who love them for their looks, handling and exotic but serviceable mechanicals, and the fact that good examples are still less than $20,000. In its native Italy, however, the Lancia Fulvia Coupe isn’t terribly uncommon, a fact that would lend a bizarre twist to this story.

My close friend and enabler Art Mason knew I was hunting for a Fulvia and was, conveniently, going to be in northern Italy in February. Mr. Mason is an airline pilot and a gearhead. Because their lives and the lives of their passengers depend on the condition of machinery, pilots are exactly the sort of people you want to look over a car for you.

Mr. Mason had an unusual multiday layover in Milan, and happily volunteered.

“Where exactly is it?” he asked. A fair question. “Looks like it’s near someplace called Piacenza, about 40 miles from Milan,” I answered. Neither of us had heard of Piacenza before, but its proximity to Milan, in the heart of Lombardy, made it easily doable by train. Mr. Mason arranged for the seller to pick him up at the train station in Piacenza.

The seller, David Graham, is a Welsh expat living with his Italian girlfriend and their young daughter. He had set up a cozy shop, DG Classic Cars, in Quarto, the next village over from Piacenza, buying and selling interesting older Italian cars, as well as vintage Land Rovers, mainly to Americans, for whom his genial nature and English are a big plus.

Mr. Graham had three Fulvias in stock, and in a call to me from Quarto, Mr. Mason went over the pluses and minuses of each. Purely on color, I chose the medium-blue one with a tan interior. I wired the money to Mr. Graham a few days later.

Shortly after my funds hit his account, people in the area started to get sick. Very sick, and in large numbers. In a few days, Lombardy became the second major coronavirus hot spot (and the first in Europe).

Mr. Graham sensed the direction in which things were headed before I did. I got a message from him with a photo of the car on a transporter, along with two other cars that he had sold for export. He had gotten the car on one of the last trucks bound for the Port of Genoa before the area was locked down.

Things went dark for a week or so until, out of the blue, I got an email from Alessandro Villa — who was handling the export of the Lancia — letting me know that the car was safe inside a warehouse in Genoa. There it would have to stay until Mr. Graham received the cancellation of the car’s registration from the Italian motor vehicle agency. I didn’t inquire for weeks. People were dying, and this was just a car, adequately insured at that. Now wasn’t the time to get antsy about small things.

On April 17, I got another message from Mr. Graham showing a DHL package and some official-looking Italian documents. He explained that this was the long-awaited registration cancellation, and that he just had to mail the papers to the port.

The next Monday, I got a phone call from him: “There’s been a rather bizarre twist in the situation with your car.”

“How much more bizarre can it get?” I replied. “Good bizarre, or bad bizarre?”

At first this didn’t really compute. Mentally, I still placed the car in a dusty warehouse in Genoa. My Fulvia wasn’t supposed to go anywhere until all of the export paperwork was in order, and that had just arrived late the previous week.

As it turned out, the warehouse contained another blue Fulvia awaiting shipment to the United States. Its papers were in order. And in the confusion that must reign in the Port of Genoa, my car was mistaken for the one that had already been cleared for shipment. It must have resembled the Al Franken-Tom Davis one gorilla/two gorilla joke from the old movie “Trading Places.”

Import paperwork is relatively simple for cars older than 25 years. A customs broker handled all of the necessary clearances and the payment of 2.5 percent in duty to the federal government. Two days later, the car showed up at my suburban Baltimore home on the back of a flatbed. I swabbed every surface down with alcohol, charged the battery, started the car, polished it and parked it in the garage, where I unhooked the battery again.

For now, the car still feels too connected with its point of origin. Getting out and enjoying it will have to await better times, both here and in Italy.