At This Coronavirus Graveyard, Family Members Have To Bury Their Loved Ones With Their Own Hands – THE SVG ONLINE
Skip to content
Main Stories 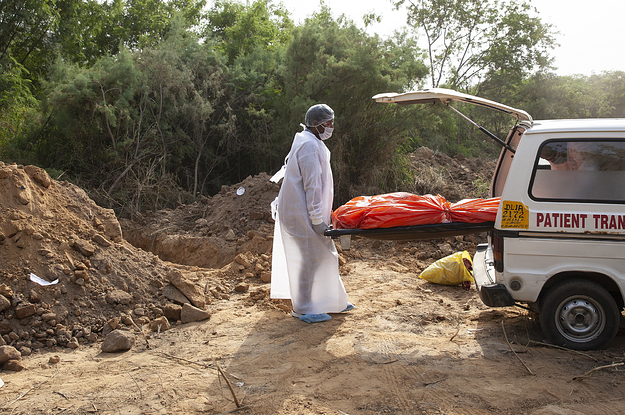 The journalists at BuzzFeed News are proud to bring you trustworthy and relevant reporting about the coronavirus. To help keep this news free, become a member and sign up for our newsletter, Outbreak Today.

NEW DELHI — By noon, Shameem was digging his fourth grave for the day. That’s when he got the call telling him that “a corona case” was on its way to him. In the past week, he had watched 22 people, all victims of COVID-19, as they were buried on the stretch of 45 acres where he lives. “Time to wear your mask,” he told his father.

Shameem, 42, is the third generation in a family of gravediggers, but the first in his family to supervise burials in a pandemic. His father and grandfather had raised him at a home allotted to them at the cemetery in the heart of New Delhi, but none of them have ever seen anything like this before — bodies arrived sealed in plastic bags, followed by mourners wearing hazmat suits.

Jadeed Qabristan, the cemetery where Shameem lives and works was declared the city’s first burial ground for victims of COVID-19 after news reports that people were refusing to bury and cremate people who had died from the coronavirus. In normal times the graveyard is mainly intended to be used for Muslim burials, but these are not normal times.

The burial scenes in Shameem’s stretch of lush, green land may seem a world away from drone footage taken above New York’s Hart Island, where thousands of people are being buried in unmarked coffins — but both bear grim witness to the ways in which the coronavirus has altered life and death. Shameem said he was afraid for the first time in his life.

“Since then, my days have been filled with fear and danger,” he said, referring to what he calls the “corona cases.”

When the bodies began to arrive, no one from the government told Shameem what to do. A doctor who he had come to know over the years, called him and instructed him on how not to handle these particular burials.

“He said, ‘we will seal the bodies completely before they come to you. Just make sure that you don’t touch the bodies, keep a distance from the family members too. They will handle the rest.’”

Shameem, his father and the other workers at the graveyard now stand at least ten feet away from the actual grave, overseeing the process.

“It’s the farthest thing from a normal burial,” Shameem said. “For non-COVID cases, we dig a grave that is 3 feet deep. For people who died from the coronavirus, graves are 10 feet deep and are dug and filled by a mechanical earthmover.”

These burials, in particular, have been incredibly difficult to watch, because family members must do all the work — lift the body from the hearse, bring it to the freshly dug grave, and then lower the body into the pit in a dignified manner to its final resting place.

“Obviously they don’t know what to do because most of them have never done this work before, people don’t realize just how heavy the dead are,” he said. “Sometimes they don’t bring ropes, other times there aren’t enough people in the family for the heavy lifting.”

The World Health Organization (WHO) has shared a list of dos and don’ts for mortuary staff and family members burying those who died of COVID-19, which includes a warning not to touch or kiss the bodies. But Shameem said it was incredibly difficult to ask grieving relatives to socially distance. Last week, Shameem was nearly moved to help a family where all the surviving members were women. “Thankfully, there was another COVID-19 burial taking place at the cemetery at the same time. We asked members from that family to help the women since they had all already been exposed.”

India’s health ministry issued instructions on the burial or cremation of COVID-19 victims on March 15, acknowledging there was a “knowledge gap” as the country was still in the preliminary stages of responding to the pandemic.

Based on the fact the WHO had said the coronavirus was spread from person to person via droplets, the health ministry recommended that people handling bodies of virus victims at hospitals and mortuaries should routinely wash their hands and wear PPE including water resistant aprons, gloves, masks and eyewear. Once the body is sealed, the health ministry recommended, those working at graveyards and crematoriums should practice standard precautions of hand hygiene, use masks and gloves, and ensure that there are no crowds at the graveyard or crematorium.

Shameem lives with his father and grandfather, along with his wife and four children. While the government and private residential colonies have taken measures to sanitize buildings, streets and even workers — Shameem said no one has bothered with sanitizing the graveyard.

“They sprayed the gates from the outside and left, even though the three places people frequent the most these days are banks, hospitals and graveyards.”

This, he said, was why he was terrified of catching the virus.

“There are nine families who live in this plot, taking care of the burial ground,” he said. Since Prime Minister Narendra Modi declared a lockdown across India, which has now been extended until May 3 — Shameem and the families living close by are worried about their survival.

“We are essential workers, but the government has not given us a pass to move around the city,” he said. “If I go out to buy groceries, the police harass us and send us home. How are we supposed to eat?”

Around one dozen laborers who also worked at the burial site left along with the exodus of migrant workers from Indian cities. Shameem said he thinks they might be stranded somewhere en route to their homes after the government ordered workers to stay where they are and put them in temporary encampments.

“It’s just as well they left, they would not have been able to afford any protective equipment if they still worked here.”

Shameem said he has had to buy masks, gloves, and sanitizer with his own money — he makes $78 a month and is struggling to feed his entire family along with purchasing personal protective equipment (PPE).

“The government should provide us with these things, they should also help families who come here by giving them a safety protocol and equipment,” he said. Thus far, everyone that has visited the burial ground has either managed to buy hazmat suits online, or watched family members be buried while sitting in a vehicle several feet away from the grave.

India now has 13,387 coronavirus cases according to the ministry of health and family welfare. There have been 437 deaths.

“Our work begins at 6 a.m. every day and we work until night,” Shameem said.