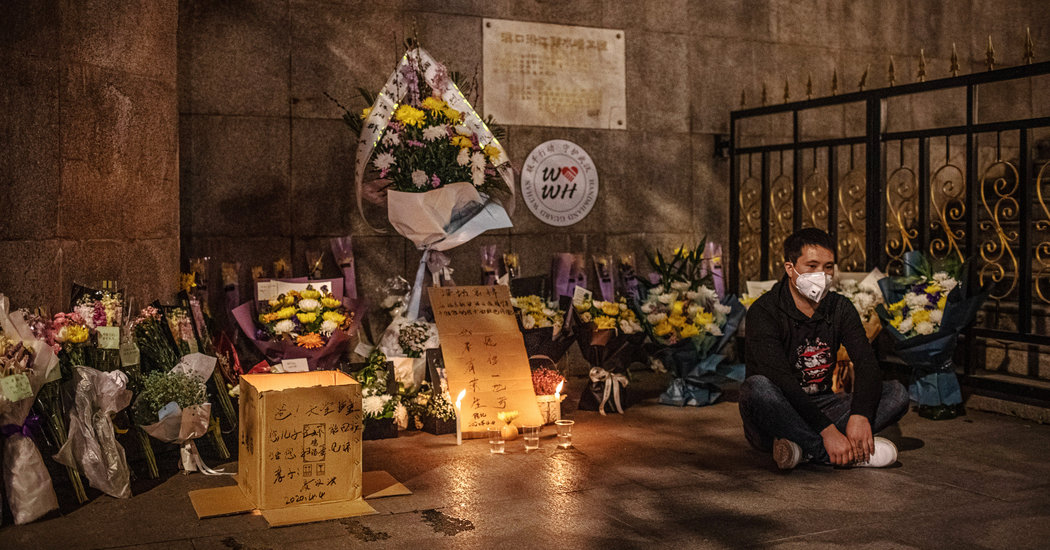 China on Friday raised its coronavirus death toll by 50 percent in Wuhan, the city where the outbreak first emerged, amid accusations that the government had concealed the extent of the epidemic.

Officials placed the new tally at 3,869 deaths from the coronavirus in the central Chinese city, an increase of 1,290 from the previous figure. The number of cumulative confirmed infections in the city was also revised upward to 50,333, an increase of 325.

The move appeared to be a response to growing questions about the accuracy of China’s official numbers and calls to hold the country responsible for a global health crisis that has killed more than 142,000 people and caused a worldwide economic slowdown.

China has been criticized as having initially mismanaged and concealed the extent of the epidemic, though it ultimately swung into action and seemingly tamed the virus. Recently, as other countries have grappled with their own outbreaks, Chinese officials have come under even greater pressure to explain how exactly the epidemic unfolded in Wuhan.

“They are on the defensive, clearly,” said Jean-Pierre Cabestan, a political science professor at Hong Kong Baptist University and an expert on Chinese politics. “It’s an uphill battle now for China to improve its image.”

In an interview Friday with the official Xinhua news agency, an unidentified official from Wuhan’s epidemic command center said that revising the figures was important for protecting the “credibility of the government” and “maintaining respect for each individual life.”

The local authorities say the new totals were reached after a detailed investigation and now include deaths at home from the virus that went unreported in the early days of the outbreak and deaths that were incorrectly reported by hospitals. After reaching a peak in February, the epidemic appears to be controlled for now in China, and restrictions in Wuhan have been loosening this month.

Experts say the revisions are not unusual. Many countries are probably underreporting their official tallies of infections and deaths, in part because of problems with testing and the speed with which the virus has overwhelmed public health care systems.

Still, the changes to the official figures are small enough that they are unlikely to quash lingering doubts about their veracity. Researchers at the University of Hong Kong recently estimated there were probably around 232,000 confirmed cases in China by late February, more than four times the number of reported cases at the time. As of Friday, China had reported more than 82,000 officially confirmed cases and over 4,500 deaths from the coronavirus, including the revised tallies in Wuhan.

Foreign governments have also raised questions about China’s official figures after seeing how the virus has ravaged their own populations.

Dominic Raab, the British foreign secretary, told Reuters on Thursday that China would have to answer “hard questions” later about how the pandemic came about and how it could have been stopped earlier. President Emmanuel Macron of France told The Financial Times, “There are clearly things that have happened that we don’t know about.”

The C.I.A. has also told the White House that China’s official figures are vastly understated, though it does not know the exact numbers, current and former American intelligence officials say. As of Friday in New York City, the virus had officially sickened 123,146 people and killed 8,632, far higher than the official tallies in Wuhan, an even larger city, where the virus is believed to have been circulating since as early as November.

“This is quite strange,” said David Hui, the director of the Stanley Ho Center for Emerging Infectious Diseases at the Chinese University of Hong Kong, referring to the revised figures. “I really don’t understand how they were able to get information on so many additional people.”

Beijing has maintained that it has been open and transparent from the start of the epidemic, and that it moved quickly to inform the World Health Organization and other countries about the outbreak in early January. The revision on Friday of the official figures appeared to be its latest attempt to show transparency. Officials had previously revised figures, in the face of public pressure, to include infections diagnosed clinically rather than through tests and, more recently, asymptomatic cases.

But even as Beijing seeks to project an image as a responsible global leader, it has struggled to restore its credibility after early reports emerged that it had silenced whistle-blowers, delayed informing the public that the virus could be transmitted among humans and rebuffed offers of help from foreign scientific experts.

Since then, the government has sought to take control of the narrative by ramping up propaganda, detaining citizen journalists, aggressively censoring news reports and expelling foreign reporters. Adding to the tensions has been a recent extended war of words between Washington and Beijing, as each side has tried to deflect blame for failures in managing the virus.

The result of China’s mixed messaging, experts say, may be a breach in global trust that could last long after the pandemic has faded.

“If you look at the state of public opinion around the world, it’s not a good omen for China,” said Mr. Cabestan of Hong Kong Baptist University. “The relationship with China is going to become much more difficult in the coming years, and the coronavirus crisis has not mitigated those tensions but fed them.”