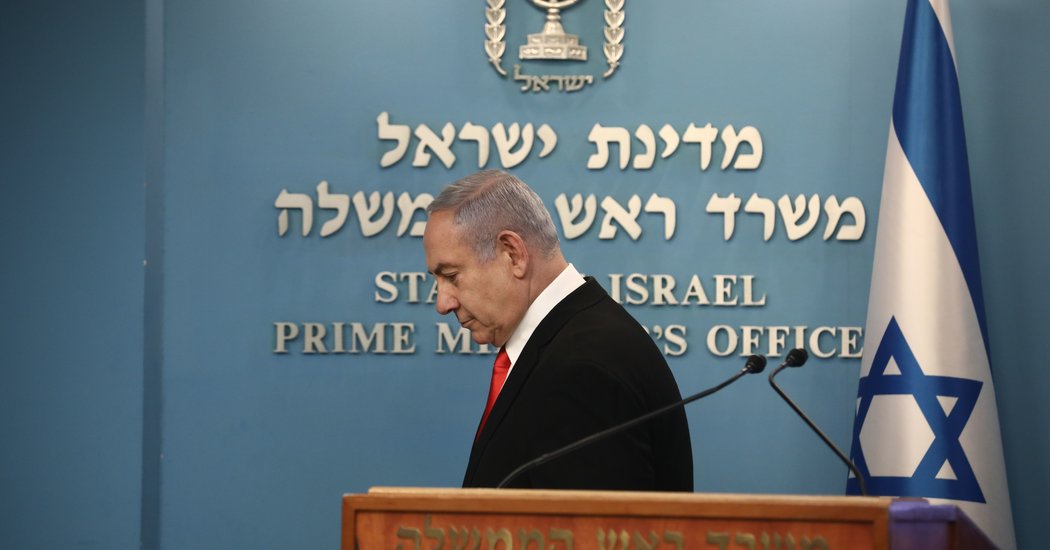 Citing a threat to Israeli democracy, opponents of Prime Minister Benjamin Netanyahu asked the Supreme Court on Sunday to block what they described as a power grab by the caretaker government under the guise of combating the coronavirus epidemic.

The petitioners asked the court to restore the full powers of Parliament, which has been largely blocked from functioning by a Netanyahu ally, Yuli Edelstein, the speaker. He has claimed public health concerns.

A new Parliament was sworn in last week, but among the key votes Mr. Edelstein has prevented is one on replacing him as speaker.

The paralysis in Parliament has only compounded the country’s political deadlock and chaos in the wake of three inconclusive elections in the past 12 months.

Mr. Netanyahu, Israel’s longest-serving prime minister, has every interest in remaining in power, if only to gain leverage in negotiating a plea deal after being indicted on charges of bribery, fraud and breach of trust. The coronavirus outbreak has provided him with a new opportunity to try to maintain his grip on power.

Though his right-wing-religious alliance narrowly lost this month’s election, the prime minister is reluctant to give up his bloc’s control of Parliament. Mr. Netanyahu has been trying to push his main rival, Benny Gantz, of the centrist Blue and White party, to join him in an emergency unity government that might prevent a fourth election.

But Likud officials said Sunday that ousting Mr. Edelstein would eliminate any chance of a unity government.

Mr. Gantz’s party, one of the petitioners to the Supreme Court, responded: “The ultimatum, while harming our democracy, makes evident that Netanyahu would like to drag this country into a fourth round of elections, even in the throes of a crisis that demands that we all act on behalf of the people, both in government and in Parliament.”

Mr. Netanyahu, has resorted to emergency regulations to usher in increasingly draconian measures to combat the spread of the virus. Those included authorizing the Shin Bet internal security agency to use cellphone data to track citizens, without any parliamentary oversight.

Avichai Mandelblit, the attorney general and a Netanyahu appointee, aired his own concerns in a statement to the court, emphasizing the “vital necessity of enabling the existence of parliamentary oversight of the work of the government, particularly at this time.”

The justice minister, a Netanyahu loyalist, also used emergency ordinances to restrict court activities, leading to the postponement of Mr. Netanyahu’s trial on corruption charges for more than two months. There are growing accusations that the government is exploiting the coronavirus epidemic to sow panic and maintain power.

Mr. Netanyahu has denounced the criticism, accusing his opponents of engaging in petty politics while he is working to save lives and stop the virus from ravaging the country. He compared himself to the captain of the Titanic in a television interview on Saturday, saying that he was steering between icebergs.

“Behind me already, there are other states, Titanics,” and there is no guarantee of success, he said.

The number of coronavirus cases in Israel surpassed 1,000 on Sunday. The first fatality, an elderly Holocaust survivor, contracted the virus in a Jerusalem nursing home and died on Friday.

The government has limited gatherings to 10 people or fewer. And Israel moved swiftly to bar the entry of foreign nationals.

Citizens have been instructed to stay home, with outings allowed for grocery shopping and medical purposes. People can go out to work if necessary, but there are strict limitations on the number of workers allowed in any one place.

The first coronavirus cases were registered in the Gaza Strip this weekend. The patients are two Palestinians who returned from Pakistan.

Aid workers have warned that an outbreak in the crowded and impoverished coastal enclave could be disastrous. At least 57 Palestinians in the occupied West Bank have tested positive for the virus. The Palestinian Authority has now put West Bank residents under virtual lockdown.

In Israel, the Supreme Court case essentially boiled down to a clash over the role of the speaker, who sets the legislative agenda.

Legal experts said the efforts by Mr. Edelstein, the departing speaker, to block a vote for his replacement was unconstitutional and subverted the results of the March 2 election. Anti-Netanyahu forces won a slim majority of 61 in the 120-seat Parliament.

Mr. Gantz was given the first chance at forming a government. But the 61 lawmakers who endorsed him belong to diverse camps that have not agreed to cooperate to form a minority government, let alone sit together in a coalition.

Mr. Netanyahu has called for Mr. Gantz to join him in a three-year emergency unity government to fight the epidemic. Mr. Netanyahu insists on leading it for the first 18 months, followed by Mr. Gantz for another 18.

The alternative would be an unpopular fourth election, putting Mr. Gantz in a tight corner. His party pledged during the election not to sit in a government led by a prime minister under indictment, and any prospect of a unity agreement is hampered by a deep distrust.

The attorney general’s statement to the court included inherent criticism of Mr. Edelstein, who has insisted that the general emergency health regulations limiting gatherings to 10 people apply to the assembly. However, the orders specifically exempted the Parliament.

Even before the court hearing began, Mr. Edelstein had put the formation of committees on Monday’s agenda, but was holding out against a vote on replacing him.

In a Facebook post on Sunday, Mr. Edelstein said that he had never shuttered Parliament, and that he was only ensuring the health of the lawmakers. By law, he said, has up until the day of the formation of a new government to hold a vote for a new speaker.

“There is no danger to democracy,” he wrote, “It’s one big bluff.”

“How can one tell if an attempt is being made to carry out a coup d’état in your country?” wrote the Israeli historian Yuval Noah Harari, author of the international best seller “Sapiens,” in an op-ed article in the popular Yediot Ahronot newspaper on Sunday. “It isn’t easy. The sky isn’t suddenly filled with large letters that read: ‘coup d’état!’ The sun continues to shine; children continue to play; people continue to eat. Everything looks normal.”

Pointing to what he called an endless loop of chatter about the coronavirus on all the Israeli television channels, he added: “It is under the cover of that chatter that an attempted coup d’état is being staged.”

On Saturday night, a coalition of civic organizations led by Darkenu, a nonpartisan group that says it represents the moderate majority of Israelis, held what they described as a virtual protest, live-streaming statements by public figures — and circumventing the limitations on public gatherings.

“No country in the world is dealing with this crisis with its judiciary and legislature disabled by the executive branch,” Yuval Diskin, a former Shin Bet chief, said of Israel’s response to the coronavirus.

Addressing Mr. Netanyahu he, he said: “Do this for the people. Go and defend yourself in court, and if you are acquitted, come back.”

The organizers said that more than 500,000 Israelis — out of a population of nine million — and 100,000 international viewers tuned in to the protest at some point.