The death toll from the new coronavirus has surpassed 5,000 in Europe, the new epicentre of the pandemic, with Italy, Spain and Germany reporting a steep rise in infections, and as worldwide fatalities surged past 11,000 on Saturday.

Italy announced 627 more deaths on Friday, the biggest day-to-day increase in the country’s four-week epidemic, a day after surpassing China’s death toll. The total number of deaths in Italy has now reached 4,032.

Spain’s death toll has also increased to more than 1,000, while in Iran, the number on fatalities hit another grim milestone of more than 1,400, as the country marks the beginning of the Persian New Year.

An estimated 235,000 people have been infected by the coronavirus globally and close to 10,000 have been confirmed dead, according to the World Health Organization.

But the data collected by the Johns Hopkins University in the United States, showed that more than 260,000 have already been infected in 166 countries, while 87,000 have recovered mostly in China, where the outbreak first erupted.

The same Johns Hopkins coronavirus monitor showed that the death toll has now surpassed 11,000 worldwide as of Saturday.

Japan’s health ministry says a Canadian man who was a passenger infected with the coronavirus while on board the cruise ship Diamond Princess died of COVID-19 pneumonia on Saturday.

The ministry offered condolences to the man, who is only identified as a man in his 70s.

The ship that had carried an infected passenger early in its voyage returned to its home port Yokohama near Tokyo in early February.

The Canadian man, who died on Saturday, is the eighth confirmed death from among those on board the Diamond Princess cruise ship, where 712 people were infected [File: Eugene Hoshiko/AP]

The 3,711 on board remained on the ship for a two-week quarantine that was much criticized as ineffective as allegedly making the vessel “an incubator.”

The Canadian is the eighth confirmed death from among those on the ship, where 712 people were infected and transferred to hospitals during the quarantine. A total of 551 have recovered and left hospitals.

The newly reported cases rose back up to above 100, from the 87 recorded on Friday, although South Korea has been experiencing a downward trend in new cases from the peak of 909 cases reported on February 29.

At least 100 people have died of the disease in the country.

For the first time in New Zealand, health authorities say there might be a local outbreak.

Health authorities on Saturday announced 13 new cases of the coronavirus infection, bringing the number of confirmed cases to 52. They say two of the cases cannot be linked immediately to overseas travel, as has been the situation for all the previous cases, accoriding to an AP news agency report.

In a rare address to the nation, New Zealand’s Prime Minister Jacinda Ardern urged people aged over 70 to stay home and all other New Zealanders to avoid non-essential travel.

She introduced a new alert system, placing the country at 2 on a scale where 4 is the highest. The country has already closed its borders to everybody but citizens and residents and placed restrictions on public gatherings. Ardern said most schools will remain open, for now.

Mexico’s health ministry said on Friday that confirmed coronavirus cases in the country now total 203, up by nearly a quarter from the previous day’s tally of 164, accoring to a Reuters news agency report.

On Friday, US President Donald Trump has announced that the US border with Mexico will be closed to non-essential travel to help contain the spread of the deadly disease. 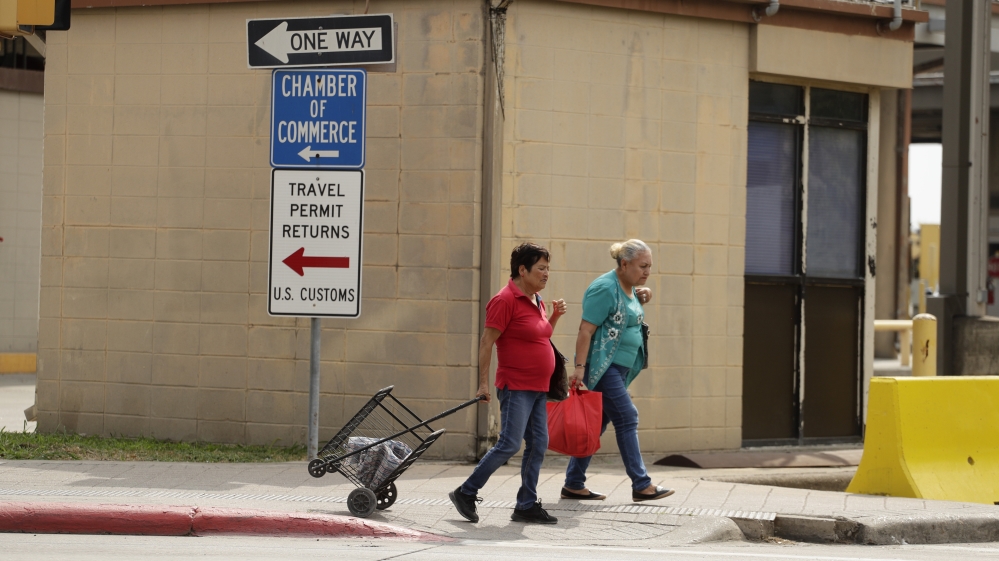 The virus outbreak’s epicentre of Wuhan in China reported no new or suspected cases again for a third consecutive day.

Overall, China on Saturday reported 41 new cases detected over the previous 24 hours, all among people traveling from overseas, and another seven deaths, six in Wuhan.

Diaz-Canel and Prime Minister Manuel Marrero Cruz said in an announcement on state television that only residents of the island would be allowed to enter for the next 30 days starting Tuesday.

As of Friday, Cuba had announced 16 cases of COVID-19 and one death, all in people who had traveled overseas or been in direct contact with a traveler. 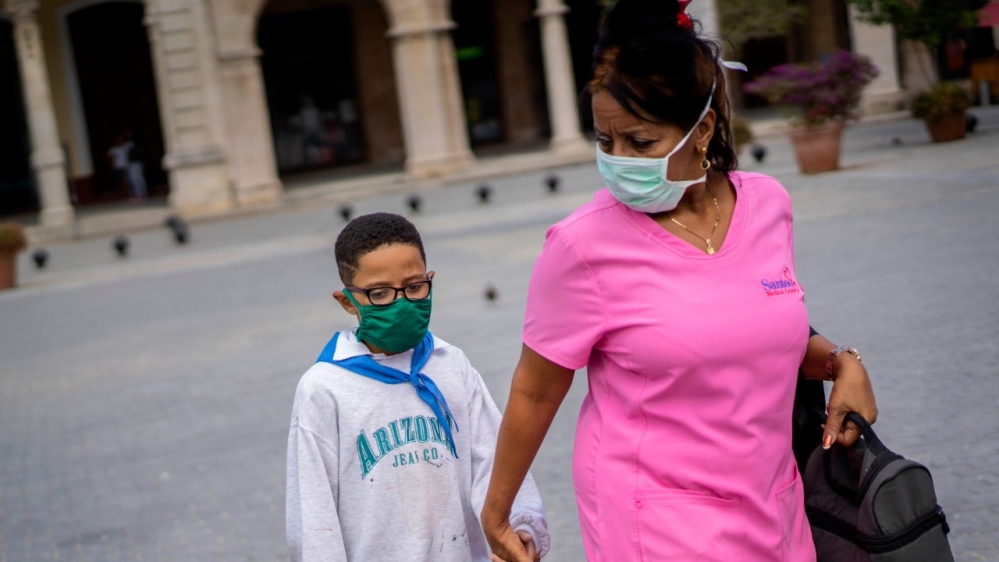 The Cuban economy is heavily dependent on tourism, which had already slowed dramatically due to US sanctions tightened by the Trump administration [Ramon Espinosa/AP]

Exceptions would be made for people involved in commercial importation, like crews of merchant ships, and for tourism industry workers who need to help tourists leave the country.

Marrero said there were about 60,000 tourists in Cuba as of Friday evening.

The Cuban economy is heavily dependent on tourism, which had already slowed dramatically due to US sanctions tightened by the Trump administration.

US President Donald Trump announced on Friday he had put the wartime Defense Production Act into action to aid the fight against coronavirus after saying earlier this week he would invoke the measure when needed.

The measure is meant to allow the US government to speed production of masks, respirators, ventilators and other needed equipment.

Trump said he put the measure into action on Thursday evening. Asked why he was putting it into action now, the president told reporters it would be used to ensure that US states could get masks and other equipment needed to fight the virus.

The White House has announced that a member of Vice President Mike Pence’s staff has tested positive for coronavirus.

Pence’s spokeswoman Katie Miller said Friday that the staff member, who is not being identified, did not have “close contact” to either the vice president or President Donald Trump. 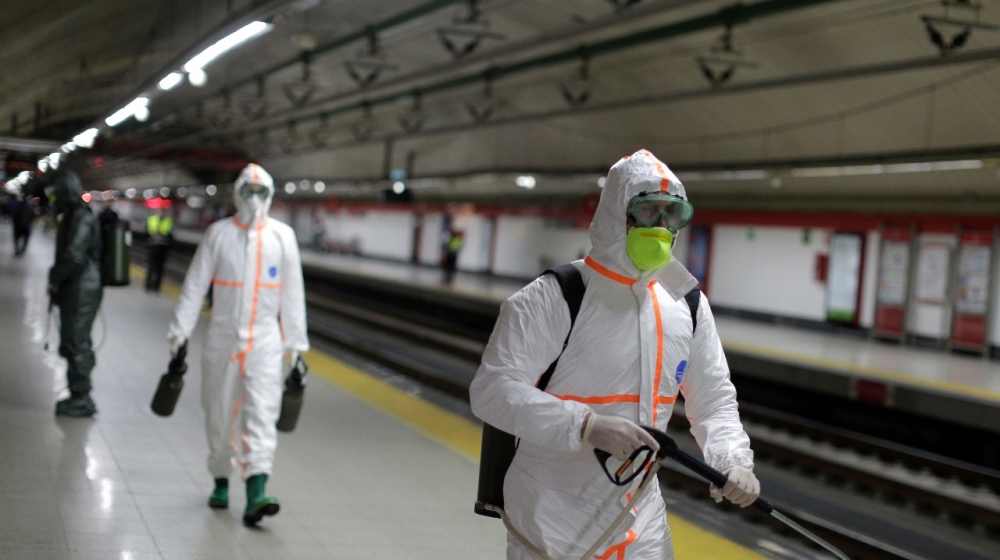 Members of Spain’s Military Emergency Unit disinfect Madrid’s subway on Friday in a bid to prevent the spread of coronavirus, which has killed more than 1,000 in the country [Manu Fernandez/AP]

The death toll in Turkey due to the coronavirus rose to nine, Health Minister Fahrettin Koca said.

The number of confirmed cases increased to 670 from 359

Israel reported its first death from the coronavirus, an 88-year-old man who also suffered from previous illnesses.

The health ministry said in a statement the man had been brought to the hospital about a week ago in serious condition.

Israel has so far reported 705 cases of coronavirus, the large majority with mild symptoms. About 10 patients are in serious condition and 15 have recovered completely.

I am Ted Regencia in Kuala Lumpur with Al Jazeera’s continuing coverage of the unfolding coronavirus pandemic.

For all the updates from yesterday (March 20), please click here.