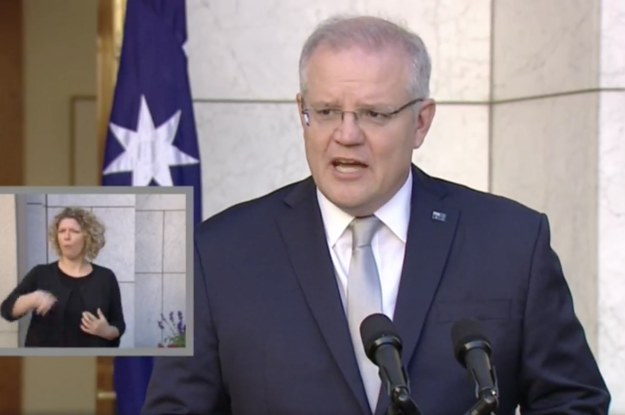 Prime minister Scott Morrison has announced a raft of changes to daily life in Australia as the coronavirus pandemic spreads.

The top lines: nonessential gatherings of more than 100 people are now banned, and Australians have been urged not to travel overseas at all.

This crisis will probably last six months or more so new measures will have to be sustainable, Morrison said.

Here’s what the new rules and advice mean for you.

What gatherings of more than 100 people are “essential” and still allowed?

You can still be indoors with 100 or more people in “essential” gatherings. According to Morrison, these are:

– Correctional facilities, youth justice centres or other places of custody, courts or tribunals

– Food markets, supermarkets, grocery stores, retail stores, shopping centres (if gatherings of that size are necessary for the normal business of those premises)

– Hotels and motels and other accommodation facilities, which includes things like mining camps

What gatherings are banned?

“Everything else,” Morrison said. Examples of this may be indoor weddings with more than 100 guests, religious gatherings at churches, mosques, synagogues and so on, concerts in small venues, etc.

The ban on gatherings of 500 or more people announced earlier this week remains in place.

– Stand a metre-and-a-half apart wherever possible.

– Sit in the back seat if you’re getting an Uber or a taxi.

– No more handshaking. No more hugging (except in your family).

“Don’t go overseas,” Morrison said. Travel advice has been raised to level 4 — the highest level, meaning do not travel anywhere in the world. This has never happened before. Morrison also advised Australians currently overseas to come back if they can.

Domestic travel is low risk, Morrison said, but people are urged to not travel to parts of the country where people may be particularly vulnerable to the coronavirus, such as remote Indigenous communities.

Should I be stocking up at the supermarket?

Morrison said in no uncertain terms to stop buying supplies in bulk, and that hoarding is the most disappointing thing he’s seen in this crisis.

“Stop doing it,” he said. “It’s ridiculous. It’s un-Australian and it must stop.”

What’s the current plan with schools?

Morrison said the “clear and unified position” of all the states and territories is that schools should stay open, despite the bans on large gatherings.

Murphy told the press conference that, unlike the flu, children appear to have low rates of contracting COVID-19 and when they do get it, symptoms are generally very mild. If schools were closed, children would not stay home and would risk infecting elderly and higher-risk Australians, Murphy said.

Murphy advised schools to avoid large assemblies and gatherings and to practise good hand hygiene. Sick students and sick teachers should not go to school. “It will be hard for schools,” he said. “But it would be much, much harder for society if the schools were closed.”

What is changing with aged care?

The government is changing the way aged care visitation works. You can’t visit your friends or family members in aged care facilities if you:

– Have returned from overseas in the last 14 days.

– Have been in contact with a confirmed case of COVID-19 in the last 14 days.

– Have fever or symptoms of acute respiratory infection

– Are not vaccinated against influenza after May 1.

Meanwhile, facilities should restrict visits to short periods of time and a maximum of two visitors at any one time. Visitors should stay 1.5 metres away from other people wherever possible. Kids 16 years and under should only visit in exceptional circumstances.

What about ANZAC Day?

“ANZAC Day events and ceremonies should be cancelled due to the higher proportion of older Australians who attend such events,” Morrison said.

Morrison said he is fed up with misinformation spreading about the coronavirus and COVID-19. He said “ridiculous stuff” about lockdowns is circulating by text message and the internet, and there are cases of deliberate fraud.

“Don’t believe it — it’s rubbish,” he said. “Go to health.gov.au and go to the state websites to get your information there.”